Pete’s Story and Irrelevant Social Clubs With No Meaning

“If today’s Church does not recapture the sacrificial spirit of the early Church, it will lose its authenticity, forfeit the loyalty of millions, and be dismissed as an irrelevant social club with no meaning….”

I first met Pete when we turned our church building into a temporary winter shelter. Doing this made sense to us because as a community of faith we are head long in walking intimately with folks experiencing homelessness and poverty. Pete is a straight-forward 61-year-old homeless man who bears the trappings of a hard lived life. After a day or so, he pointedly confessed he wasn’t a christian and had no interest in becoming one. His experience in various church-sponsored sheltering programs were not much to brag about, but he supposed a “warm building even filled with cold people” (referring to Christians) was better than a cold night’s sleep. So he kept showing up.

Over time Pete became a friend to many of us and we became his. We began helping Pete address some of his biggest challenges keeping him on the street. Slowly but surely we chipped away at some of these issues and whittled away some of his deepest fears in the process. He started hanging out with us more throughout the week and even started gathering with us on Sundays. From time to time Pete would comment on something he experienced in one of our gatherings and would want talk it through, sometimes on his own terms. Quite and reserved, Pete is a deep man.

As Pete was leaving Williamsburg for his annual six-month stint in New Jersey where he works as a seasonal carnival cook, he asked me into my office. With tears in his eyes this is what he shared:

“Fred, when I was nine my parents forced me to attend a religious school. One day the head master called me into his office. I still cannot remember why, but I remember what happened. It changed me Fred. He told me to hold out my palms so I did. With a stick in his hand, he smacked each one of my wrists. Then, he asked me to turn my hands over and he smacked the back of each one. Fred, that day something snapped. I was only nine, but I vowed to never trust a religious person again for as long as I live. For fifty-two years I haven’t trusted one single religious person. Until now. Because of you guys and this church. You guys have made me feel human and you’ve made sense of the Bible to me. I just wanted you to know.”

With those words Pete and I talked about the gospel of God’s kingdom; we talked about King Jesus. He admitted that he had never heard “that story.” After thanking me, we hugged, prayed, and he left for New Jersey for the carnival season.

Each week I receive a text message from Pete. He checks in to let me know how he’s doing and asks about different people in the church. Every text he reminds me he’ll be back soon and looks forward to hanging out with everyone. 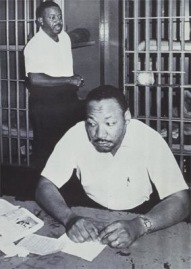 Though Dr. King was speaking to the American church of 1960, his prophetic words ring true today in our Post-Christian culture. It seems we live in an American culture that has heard enough of our message and had enough of our church buildings. Sadly, many have come to believe that the church has lost her authenticity and deserves nothing less than dismissal as an irrelevant social club with no meaning. And if I am wrong with the “many” part, this was at least Pete’s disposition. But if the “many” part is even close, and if they are anything like Pete, they will remain unwilling to listen until our collective lives bear a closer witness to the One we talk about.

Pete comes back around October. It will be good to see my friend again and I sure hope he gets to know Jesus a lot better.