Christ, Christianity, Donald Trump and Me

This morning in my devotional reading I was reminded of the truth-telling ministry of John the Baptist. He didn’t hesitate to enter into ethical debates, whether it was calling his hearers to humble generosity or religious leaders to repentance. What strikes me the most is how John didn’t hesitate to call Tetrarch Herod Antipas to repentance. John’s concern wasn’t the Ruler’s legislative policies for Galilee, it was his immoral character. John’s desire to see righteous and godly character in the lives of those who claimed righteousness and godliness had no boundaries. Right is right, wrong is wrong, unjust is unjust, immoral is immoral. John longed for truth and for all to know God’s goodness and righteousness and he wasn’t afraid to call out anyone, even a politician. Of course, it landed him in prison and ultimately cost him his head (read Mark 6, Matthew 14, Luke 3). 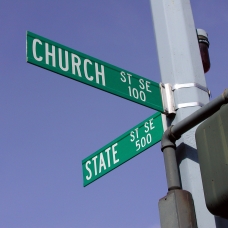 As a pastor I’ve always felt it was wise to stay out of party-political discourse in public venues. I’ve made it my aim never to post something on Facebook or a blog that would marginalize members of my own faith community or my local neighbors. I would rather keep it local and face to face. I prefer to have hard conversations across tables or over coffee where non-verbals can be seen and voice inflections heard. For those who read my posts you know that there are times where I speak out on justice issues. I’ve long been an activist for restorative justice, poverty alleviation and human rights. My faith has shaped me in this way and has informed my ministry. But I have never posted, reposted or shared any thing that so much as hinted American party politics.

Today John the Baptist convicted me a bit. After all, following Jesus looks like something. So I offer this not as a pastor, but as a Christ-follower (and please forgive my lack of literary eloquence).

In Christianity there are certain ethics that must be embraced. Imagine if, on public television or in a gathering of people, I made fun of a man’s physical disability. Imagine if I made a public comment about a woman, one we all know, referencing her menstrual cycle because I thought she publicly hurt my feelings. Imagine if I publicly proclaimed, “Yes, I am a christian but I have never asked God for forgiveness.”

What would you think? Would you love me enough to speak into my life or would you let it go? Would you say to me, “Fred, how can you be a Christian, much less a pastor, and never ask God for forgiveness? How can you publicly mock a man’s disability or make comments like that toward a woman (or women) and think that’s okay? Isn’t that reason enough to ask God for forgiveness, followed by asking them for forgiveness?” Wouldn’t you conclude, whether privately or openly, “Fred’s words and actions are not recognizable in Jesus’ teaching and way of life, much less in the ethics of Christianity.” You would be right to say so because Jesus once said, “by their fruits you will recognize them.”

I really wish it were easier to see the Christ in Donald Trump’s Christianity. I really do. But I can’t recognize it by the “fruit.” My heart aches over this, not because I want to vote for him but because he believes he can confess Jesus as Lord and not take Jesus’ Lordship seriously enough to repent. Therein lies the problem. To believe that we can somehow be “good enough” is contrary to the gospel–the good news–Jesus offers!

The most basic belief behind Christianity is that we need the Christ. Yet when someone publicly claims to be a Christian while professing that he has never asked God for forgiveness, well, that is to make an utterly unrecognizable claim of Christianity. It bears witness to a version of the christian faith that isn’t Christianity at all (Lord knows we, the Church, have already done enough of that). In its most practical sense, without repentance we’re left to be self-determinative as to what is right, wrong, just, kind and moral. Without repentance the fruit we bear will inevitably look like making fun of a disabled man, shaming women, making racially charged statements, being hostile toward others, outbursts of anger, selfish ambitions–what the apostle Paul called “works of the flesh.”

I am well aware that I’m a jacked-up man. Anyone who knows me can tell you as much. There are times when I find myself reaching back to my old way of life to take hold of anger, hostility and selfish ambition. But it is the Lordship and love of Christ that gets my attention. It is the kindness of God that leads me to repentance, to ask for forgiveness from both God and those I have wronged (no doubt I have had to do this with some of you reading this post). I am called to repentance because I follow Someone who shows me what love looks like, what it means to be truly human and live under the loving reign of holy God. It is God’s kindness to us in Jesus that calls me to a different way of being and doing. I see it when Jesus proves that He would rather die for enemies than kill them; to forgive rather than hate; to heal the disabled rather than mock them; to welcome those hostile toward him rather than dismiss them. Then I hear him tell His followers to learn what it means to do the same. I stumble. I fall. I fail. But by his grace I am called to get back up and follow in the assurance of his redemptive love. And every now and then, hopefully more times than not, you will recognize glimpses of Jesus in my actions. This has to be important to me because Jesus said that it was by our fruit others will recognize that we are christians.

Admittedly I am confounded and confused as to how christians are so easily running to Donald Trump. The narrative being written in the public eye bears witness to an unrecognizable form of Christianity as Mr. Trump blatantly puts forward a christianity that is far from Christ. Moral statements and ethics aside (which really can’t be set aside, but for sake of argument), at the very least can you be a Christian if you’re unwilling to admit you need the Christ of Christianity?

“‘I am not sure I have,’ Trump said when asked if he’d ever asked God for forgiveness. ‘I just go on and try to do a better job from there. I don’t think so,” he said. “I think if I do something wrong, I think, I just try and make it right. I don’t bring God into that picture. I don’t.'” (read here for the full article)

This statement alone makes Mr. Trump far different from his competitors, and I genuinely hurt for the man.

I want to be very clear and open. I believe Donald Trump’s behavior, ethics and claims are unconscionable. Personally, I believe he is wholly unworthy of leadership and public influence (I agree with the sentiments of Max Lucado’s post). I want you to feel free to disagree. The greater issue here, however, is how Mr. Trump’s witness has reminded me of how skewed christianity has become in these United States. It’s tragic and frustrating. Yet, Mr. Trump’s life put on display, with all the vitriol and division he has purposefully orchestrated, has also reminded me that no one is beyond redemption–no one is outside the reach of God’s grace. But living in light of God’s grace must look like something, and what Donald Trump has put on display does not.

More than anything I want Donald Trump to know the One he claims to know. This weekend I was convicted by Scripture to pray for him (at the risk of sounding terribly cliche). “The Lord is good to everyone and his compassion rests on all he has made,” the psalmist reminds me. More than votes Donald Trump needs prayer, so that his public life will begin looking more like his confession.

The same can be said for my life too. May it be so.

Fred came to serve greater Williamsburg and WCC as lead pastor in October of 2010 and is grateful to be a part of the family. He is a husband, father, certified trauma professional, S.T.A.R. (strategies for trauma awareness & resilience) practitioner, community organizer, TEDx alum, founder of 3e Restoration, Inc. and co-owner of Philoxenia Culture LLC. He received his B.S. in Ministry/Bible at Amridge University and his Master’s of Religious Education in Missional Leadership from Rochester University. Currently he is a candidate for a Doctorate of Ministry in Contextual Theology in at Northern Seminary in Chicago. Fred has also served as an adjunct professor for Rochester University and Regent University where taught courses in philosophy, ethics, leadership, pastoral care, intro to Christianity, and ethnography. He has also served as a guest lecturer on the subjects of racialized cultural systems, poverty, and missiology at various universities, such as William & Mary and Oklahoma Christian University. Fred has authored on book (Racialized Cultural Systems, Social Displacement and Christian Hospitality) and several curriculum offerings, including The FloorPlan: Living Toward Restoration & Resilience. Fred enjoys hanging out with his family anytime, anywhere. He is deeply grateful for how God graciously works through the Church in all her various forms, despite our brokenness. He is passionate about seeing the last, least, and lonely of every neighborhood, city and nation experience God’s in-breaking kingdom, and come to know Jesus as King. Oh, and his favorite season is Advent and Christmas. Fred is a founding member of the board of directors for Virginia Racial Healing Institute, a member of the leadership team for Williamsburg's local chapter of Coming to the Table, and a member of Greater Williamsburg Trauma-Informed Community Network's Racial Trauma Committee and Training Committee.
View all posts by Fred →
This entry was posted in Christian living, Church. Bookmark the permalink.

4 Responses to Christ, Christianity, Donald Trump and Me