In our good country christians enjoy safety and security. In others christians live every day with the possibility of death. They are pushed toward an allegiance to Christ as Lord that is unbreakable, resulting in a deep dependency and trust that for many of us seems unimaginable. Yet their stories and actions show us that it is not only imaginable, but possible and even necessary.

Every week I read from the Voice of the Martyrs. I have donated and read their publications for almost 17 years (I hope you’ll consider giving to them too and subscribe to their publications). The stories of brothers and sisters all across the world has greatly shaped my faith and over and again proven my need to mature as a Christ follower. They are my teachers.

I’ve also read the works of the early church fathers for 17 years. These theologians and leaders have played a pivotal role in my understanding of what it looks like to possess a high view of the Scriptures and trust the promises of God revealed in Jesus Christ. With all their imperfections (like us they were heavily influenced by their cultures, resulting in questionable points of view in matters of gender and race), they loved the Lord and His Church, and many died a martyrs death to prove it. Plus, I am always stirred by the language with which they express faith is compelling. We just don’t talk like that anymore. They too are my teachers.

I offer two parallel stories here. One is from Syria in a 21st century world of globalization and taken directly from Voice of the Martyrs. The other is from Alexandria Greece in a 3rd century world ruled by Rome.¹

Both stories are of real people living in real places in really difficult times confessing the same allegiance to the Lordship of Christ. 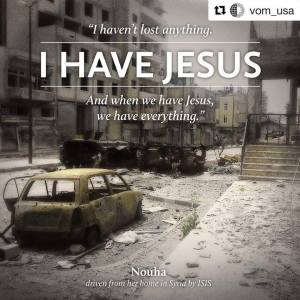 “Sister ‘Nouha,’ a Syrian believer and her family were driven from their home by ISIS. They lost their businesses, home, land, and worst of all many people they loved. She was asked by a Voice of the Martyrs worker: “Nouha, you’ve lost a lot. Why is it worth it to you to follow Jesus?”

She responded: “I haven’t lost anything. I have Jesus. And when we have Jesus, we have everything.”

Nouha and her family have chosen to stay in Syria to help build up the church and reach out in love to Muslims. Pray for sister Nouha and the many believers like her who have chosen to stay. May we always be motivated by the worth of Christ, no matter what happens.” 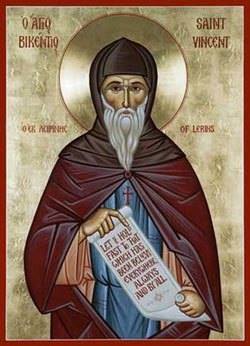 “To those who ask us whence we have come or whom we have for a leader, we say that we have come in accordance with the counsels of Jesus to cut down our warlike and arrogant swords of argument into ploughshares, and we convert into sickles the spears we formerly used in fighting. For we no longer take ‘sword against a nation,’ nor do we learn ‘any more to make war,’ having become sons of peace for the sake of Jesus, who is our leader, instead of following the ancestral customs in which we were strangers to the covenants.”

Origen was born in Alexandria. At age 18 he opened a grammar school to support his family around the time his father was beheaded for his christian faith. It is there he copied texts and instructed those seeking to become members of the church. He also studied under the pagan philosopher Ammonius Saccas in order to better understand paganism and give reasonable arguments for the faith he confessed.

Origen spent 20 years working on his “Hexapla,” a massive work of Old Testament analysis written to answer Jewish and Gnostic critics of Christianity. This work was so important that it became a significant step in the development of the Christian canon (the Bible as we know it) and scriptural translation.

In no way was he flawless in his interpretations of Scripture. But he was dedicated to understanding what it looked like for God to reorder the world through the Lordship of Jesus and the coming of his kingdom so the Church could embody a witness of faith, hope and love. Origen wanted those who confessed Jesus as Lord to be able to trust him fully in complete loyalty and total allegiance rather than fall prey to Caesar’s decrees of complete loyalty and total allegiance. To Origen faith (pistis) meant more than affection or a belief in God or his promises, and is about trust, loyalty and a total allegiance grounded in love. Speaking of faith in these terms makes it clear that what’s expected of christians as adopted children and heirs and subjects of God’s kingdom is a call to embodied faithfulness to the Lordship of Jesus. This kind of faith renders the distinctions between ‘faith’ and ‘works’ absurd, for a child and heir to God’s kingdom cannot be loyal to their King without following His commands.

Origen recognized that all ruling powers, like Rome, would regularly be at odds with the reign of God in Christ and contend with christian faithfulness. He believed that God’s reign had to become concretely visible to the world through a people who lived by faith (trusting allegiance) expressed in love (for God, fellow christian, neighbor, and enemy), committed to peace (shalom), and anchored in hope (that God’s promises of life eternal are true). Christians will not change society by trying to change society. Christians will change society by living faithfully in society as subjects of a different King. It is this conviction that caused him to say what I quote above.

The authorities were not impressed. In 250 the Roman emperor Decius had Origen imprisoned and tortured. He was deliberately kept alive in the hope that he would renounce his faith. But Decius died first and Origen was released. With his health inalterably damaged, Origen died soon after.

A Cloud of Witnesses

Stories like these always draw my attention back to the Scriptures where it is said:

“Therefore, since we also have such a large cloud of witnesses surrounding us, let us lay aside every weight and the sin that so easily ensnares us. Let us run with endurance the race that lies before us,  keeping our eyes on Jesus, the source and perfecter of our faith, who for the joy that lay before Him endured a cross and despised the shame and has sat down at the right hand of God’s throne.” ~ Hebrews 12:1-3

¹ By globalization I mean the process of interaction and integration of goods, services and cultures between companies and governments of nations.

I am a follower of Jesus, husband and father. I am a son, brother, friend, multi-vocational pastor with Williamsburg Christian Church, TEDx alum, ethnographer, community organizer, published author, founder and president of 3e Restoration Inc, and adjunct professor at Rochester University and Regent University. I received my B.S. in Ministry/Bible at Amridge University and my Masters of Religious Education in Missional Leadership (MREML) from Rochester University. I am currently working toward my Doctorate of Ministry in Contextual Theology at Northern Seminary.
View all posts by Fred →
This entry was posted in Uncategorized. Bookmark the permalink.